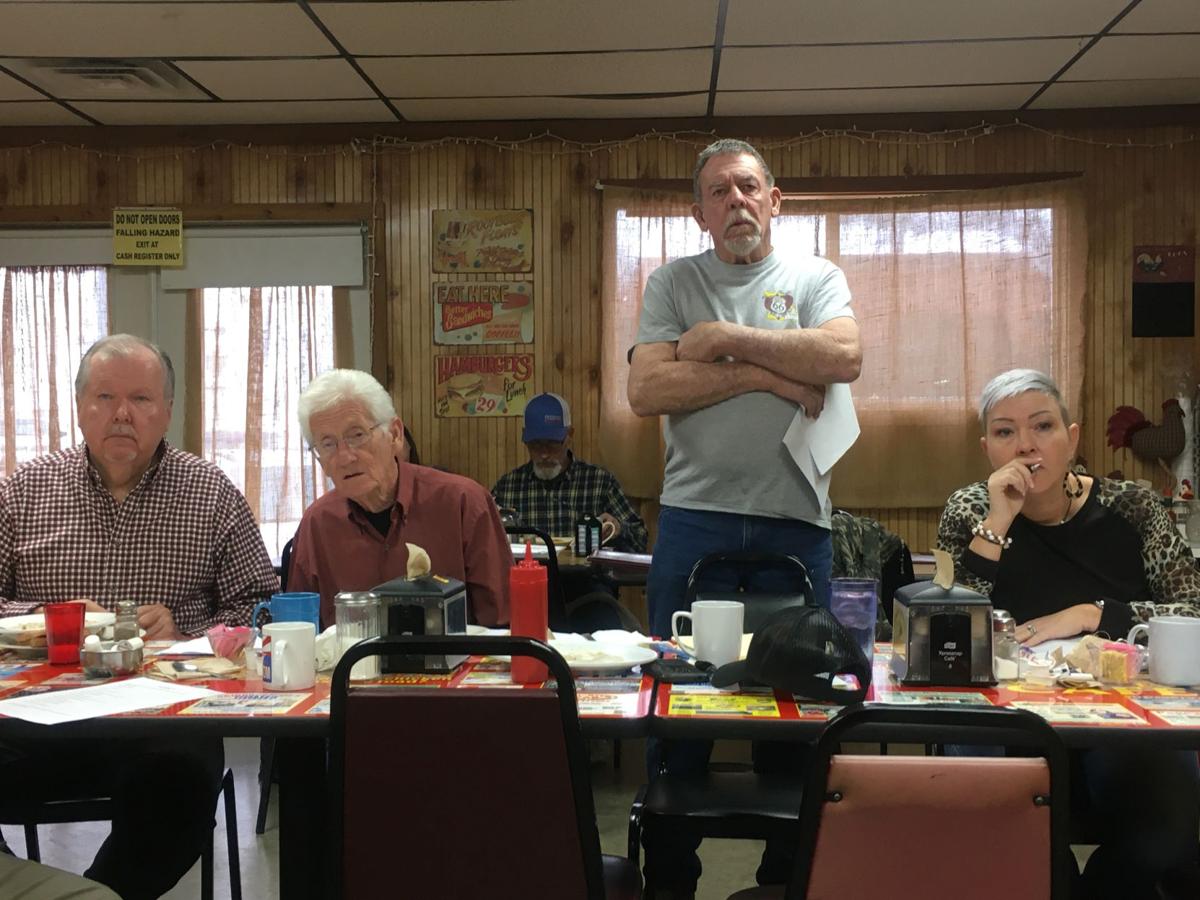 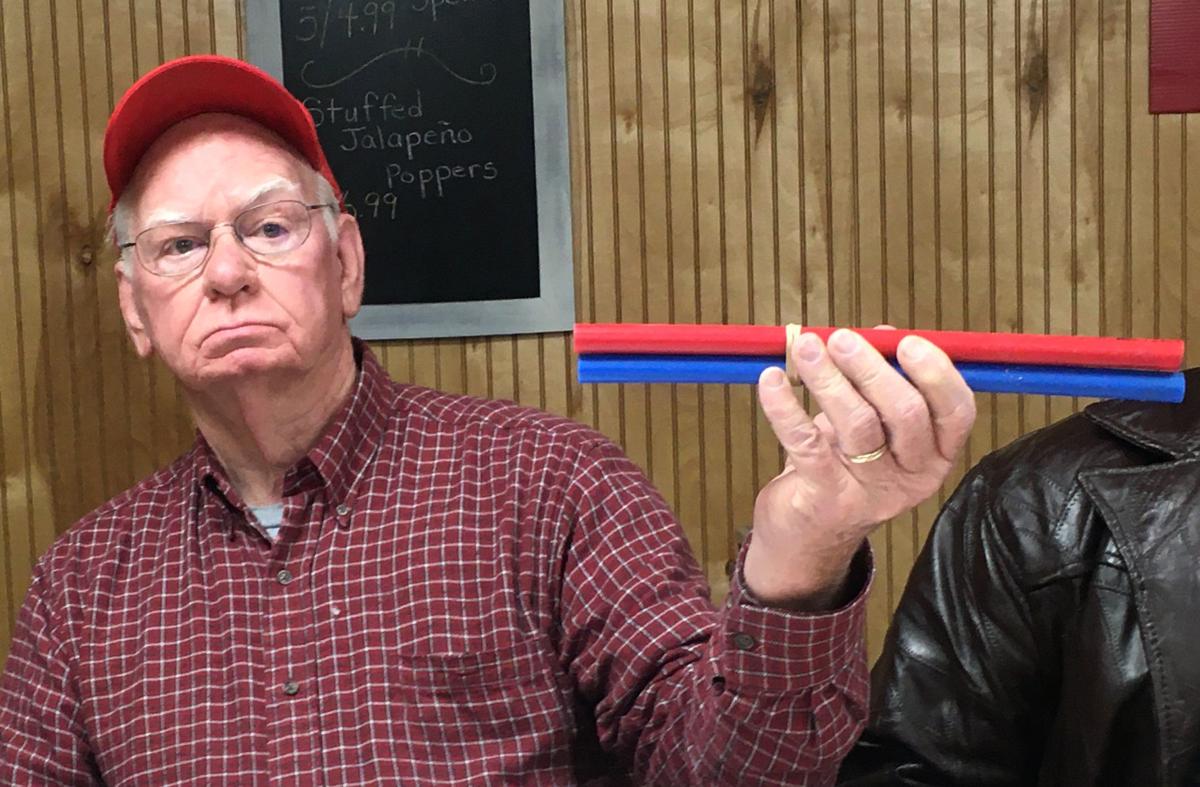 Dave Chastain, chairman of the Project Priorities Committee, displays red and blue PEX tubing that will be installed on the facade of the Underpass Cafe to imitate the original neon. 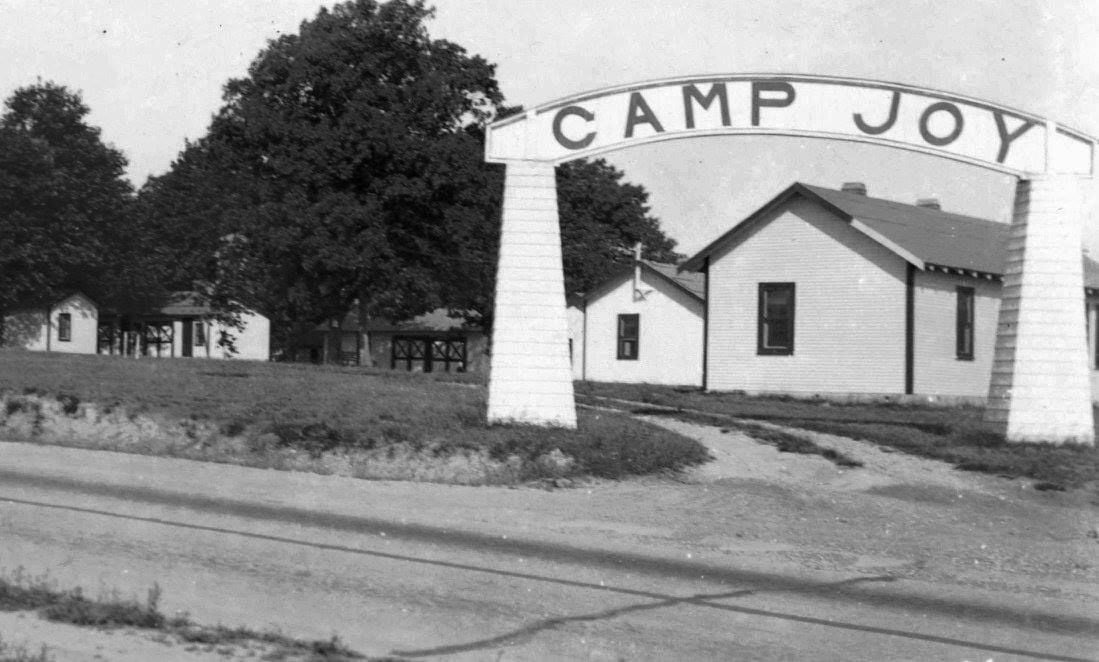 The arch at the entrance to Camp Joy, Lebanon's first tourist camp. A smaller replica arch is proposed for the new sidewalk to be installed at the restored Camp Joy cabin in Boswell Park.

Installing imitation neon tubing at the Underpass Café and a new security system at the Camp Joy cabin are the first projects the Lebanon-Laclede County Route 66 Society will undertake after accepting a detailed plan from its Project Priorities Committee.

The plan, developed Jan. 25 by the committee and approved Tuesday by the society’s board, outlines priorities for three Route 66 restoration projects the group has undertaken: the Camp Joy cabin at Boswell Park, the Underpass Café at Phillipsburg and the Twin Oaks property at Phillipsburg.

The first priority is to finish improvements to the Camp Joy cabin, which the society restored last year and, with the blessing of the City of Lebanon, moved to Route 66-themed Boswell Park. The Camp Joy improvements, in order:

Howard Fuller, who has been working with Randy Angst of Bailey’s on the security system, said it will be installed this week.

A sidewalk to the cabin will be installed this spring by the city. Dave Chastain, chairman of the Project Priorities Committee, said he envisions an arch over the sidewalk that would resemble the arch that once stood at the Camp Joy entrance.

The second priority is to finish restoring the exterior of the Underpass Café. The desired improvements, in order:

Chastain explained several options for inexpensive blue and red tubing that in daylight would mimic the neon that once lit up the café at night. The board approved a plan to use colored PEX tubing reinforced by rebar. Route 66 Society member Lynn Stowe offered to pay for the tubing.

The window to be covered with black-painted plywood is on the east side of the building, unseen from the road, Chastain said.

The Route 66 Society so far has been unable to find an affordable vintage prefabricated gas station similar to the Carter & Lawson station that once sat next to the Underpass Café. The current plan is to create a replica out of a box truck or trailer.

Route 66 Society board member Bill Jones said he and Hackler placed vinyl over the station’s leaky roof as a temporary solution Saturday and discovered that the boards beneath the shingles are in worse condition than previously thought.

The overall plan concludes: “It is the recommendation of the Project Priorities Committee to complete the above projects completely before taking on any other projects.”

Tuesday’s meeting, attended by 21 board members and other Route 66 supporters, was the first to be led by newly elected President Bruce Owen.

Former President Bill Jones, who stepped down effective with the Jan. 25 annual membership meeting, thanked board members Tuesday “for putting up with me” for the past four years. Jones, who received a plaque at the Jan. 25 meeting in recognition of his service, thanked his fellow board members for all their help. “That plaque wasn’t just for me – it was for all of you.”

Owen thanked Jones for all he did as president. Owen also thanked Loretta Young for decorating the meeting room Jan. 25.

In other business Tuesday, Michael Boggs, a board member of the Route 66 Association of Missouri, reported that the state board compiled two pages of questions Saturday when it met to consider the possibility of the association taking ownership of the threatened Route 66 Gasconade River Bridge.

Boggs said the list includes legal questions, liability questions and to “see if we’re even able to own real estate.”

“The support is definitely there,” Boggs said. “We just have to cross all the T’s and dot the I’s first to make sure we don’t run into some things down the road.”

The state association’s board will consider the bridge proposal again Feb. 22. The Missouri Department of Transportation said earlier that a new owner must be found by April 20 or MoDOT will seek bids to demolish the bridge.

--Cliff Claxton, society treasurer, reported that plans for the 2020 Lebanon Route 66 Festival “are moving forward.” The festival committee will meet at 11 a.m. this Thursday, Feb. 6, at the Cowan Civic Center conference room. This year's festival is a partnership of the Lebanon-Laclede County Route 66 Society and the City of Lebanon Tourism and Parks and Recreation departments. The festival -- Lebanon's 13th -- again will be held Father's Day Weekend, June 19-20.