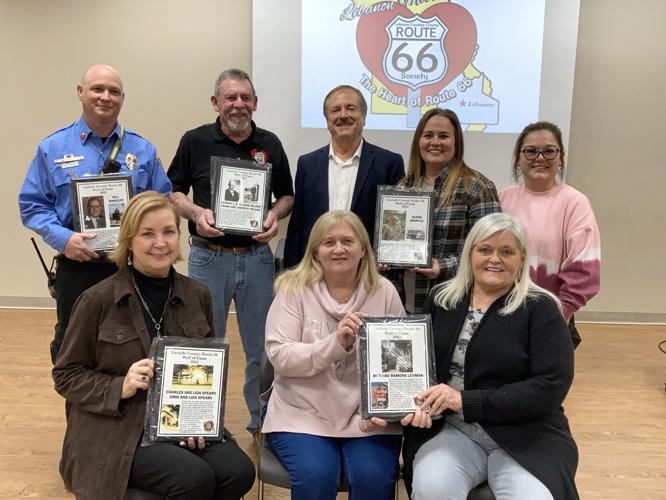 Family members of the first Laclede County Route 66 Wall of Fame inductees gather for a group photo Monday night after the ceremony and annual meeting of the Lebanon-Laclede County Route 66 Society. Seated, from left: Donna Fishel, representing her husband’s great-grandparents and grandparents, Charles and Lida Spears and Emis and Lois Spears, founders of Camp Joy; and Mary Jo Shadel and Shelly Cravens, daughters of Ramona and the late Bob Lehman, who in 1971 bought the Munger Moss Motel, which Ramona still operates. Standing, from left: David Wheeler, son of the late Bill Wheeler, originator of the Lebanon Route 66 Festival and the Route 66 Society; Bruce Owen, representing his great-grandparents and grandparents, Col. Arthur T. and Lizzie Nelson and Frank and Dorothy Nelson, founders of the Nelson Tavern (a hotel) and Nelson’s Dream Village; and Terry Wrinkle, son of Glenn Wrinkle, operator of Wrink’s Market for 55 years; Katie Wrinkle, granddaughter of Glenn Wrinkle, and Abbi Suess, great-granddaughter of Glenn Wrinkle. 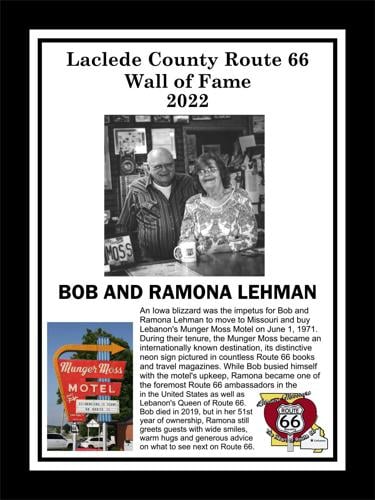 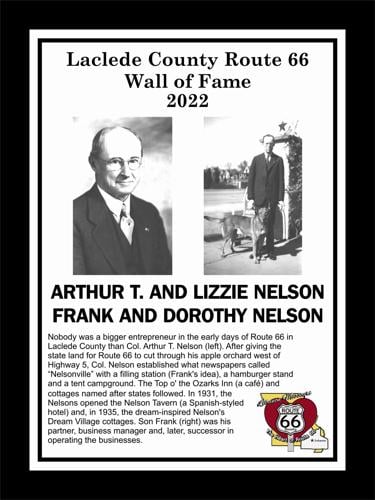 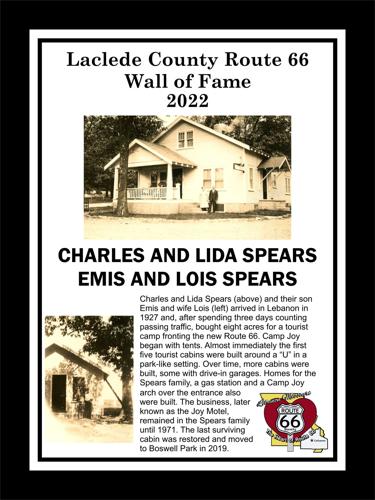 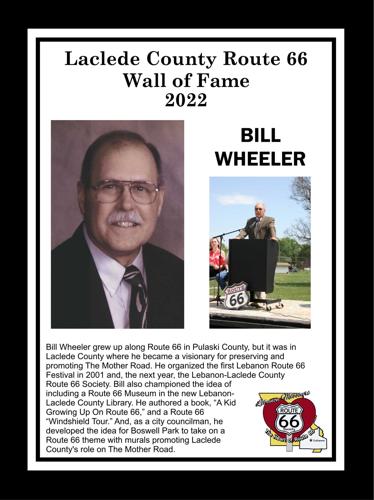 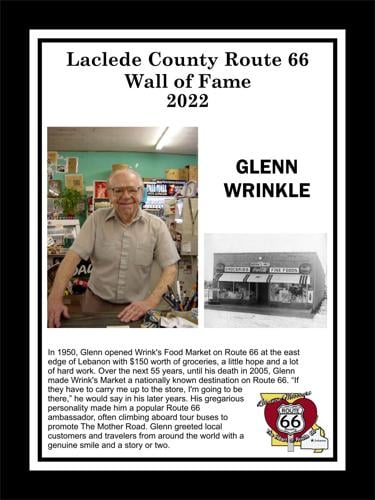 Bruce Owen accepted a plaque from emcee Gary Sosniecki in honor of his ancestors Col. Arthur T. and Lizzie Nelson and Frank and Dorothy Nelson, founders of the Nelson Tavern (a hotel) and Nelson’s Dream Village.

Also at Monday’s meeting, Cathy Dame, director of the Lebanon-Laclede County Library, reported that despite the pandemic, the Route 66 Museum guest book was signed by visitors from 29 countries in 2021. The country with the most visitors was Russia.

All 50 states were represented in the guest book, “I think for the first time,” Dame said. Illinois had the most visitors. Maine and Rhode Island had the least, two each.

The museum had visitors from 195 Missouri cities.

“Really, not that bad of a year considering all that happened,” Dame said.

Dame also reported that the Missouri Department of Transportation is working with the museum on a future display about the Route 66 Gasconade River Bridge at Hazelgreen.

In a report on Lebanon tourism, director Rebecca Rupard said Route 66 remains one of Lebanon’s top attractions. “It draws visitors from all over the world. We’re excited that the world may be opening up again soon (post-pandemic).”

Route 66 Society President Bruce Owen said Rupard “does an outstanding job for us and the city.”

Heritage Bank of the Ozarks again will be the presenting sponsor of the Lebanon Route 66 Festival this year thanks to a $5,000 check that Chief Executive Officer and President Kim Light presented Monday night to Bruce Owen, president of the Lebanon-Laclede County Route 66 Society. (See separate story).

Rebecca Rupard and Lindsey Slavens are co-chairmen of this year’s festival, which again will be held downtown on the Friday night and at Boswell Park on the Saturday of Father’s Day weekend.

Route 66 Society treasurer Cliff Claxton reported that “East Bound and Down,” a group of “Smokey and the Bandit” enthusiasts, including a Sheriff Buford T. Justice look-alike, has been booked to bring its vehicles to the festival.

About 50 attended the meeting.