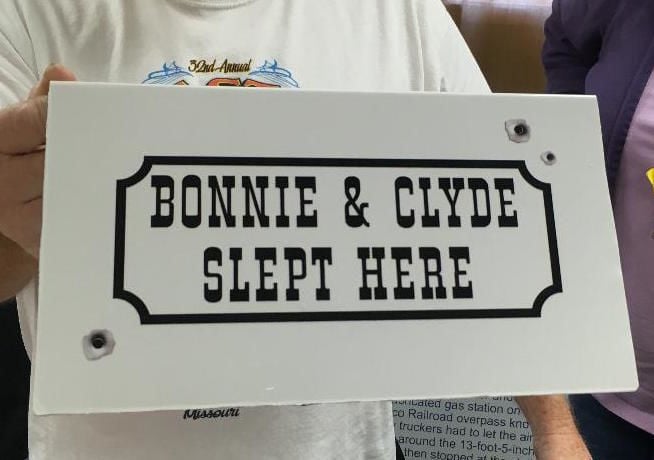 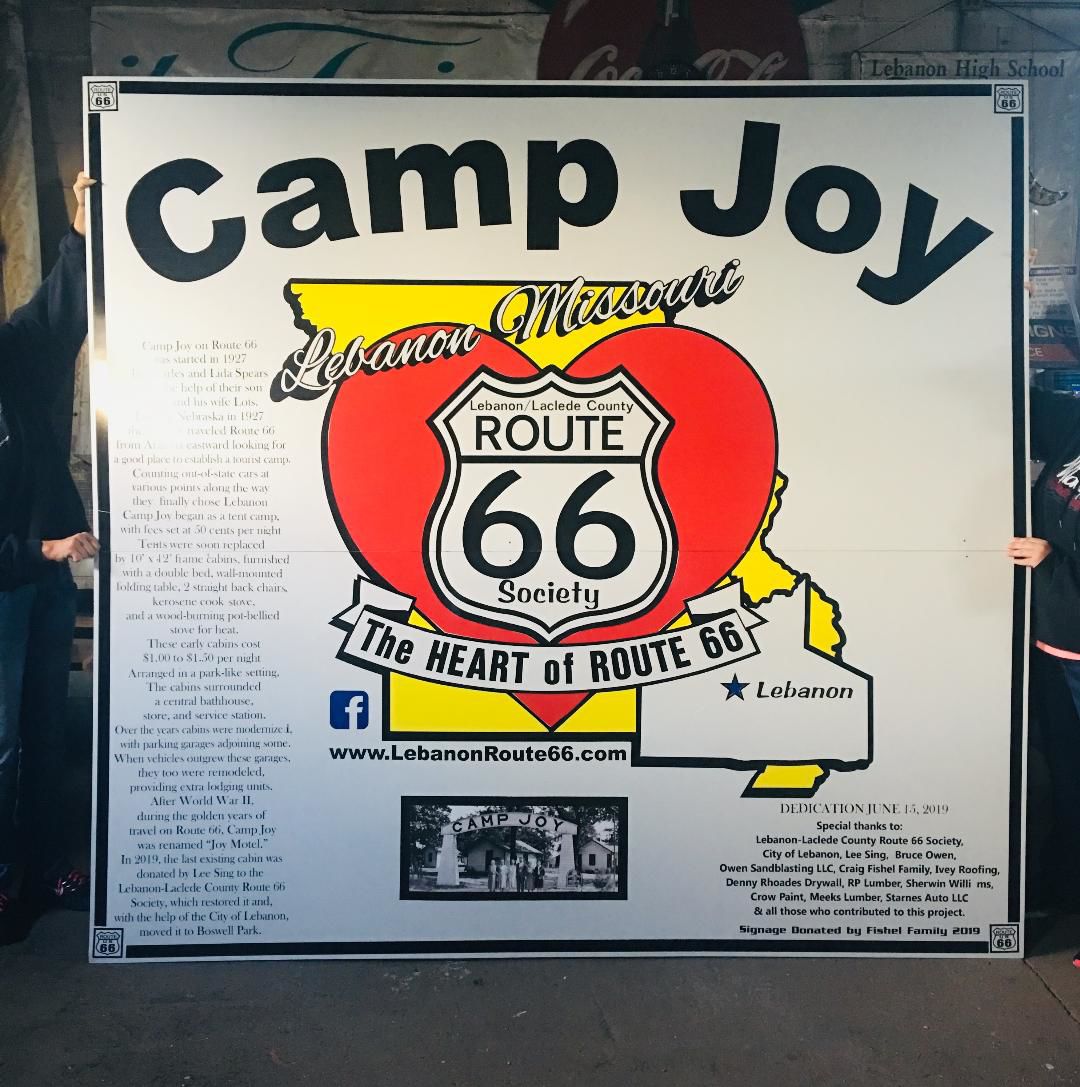 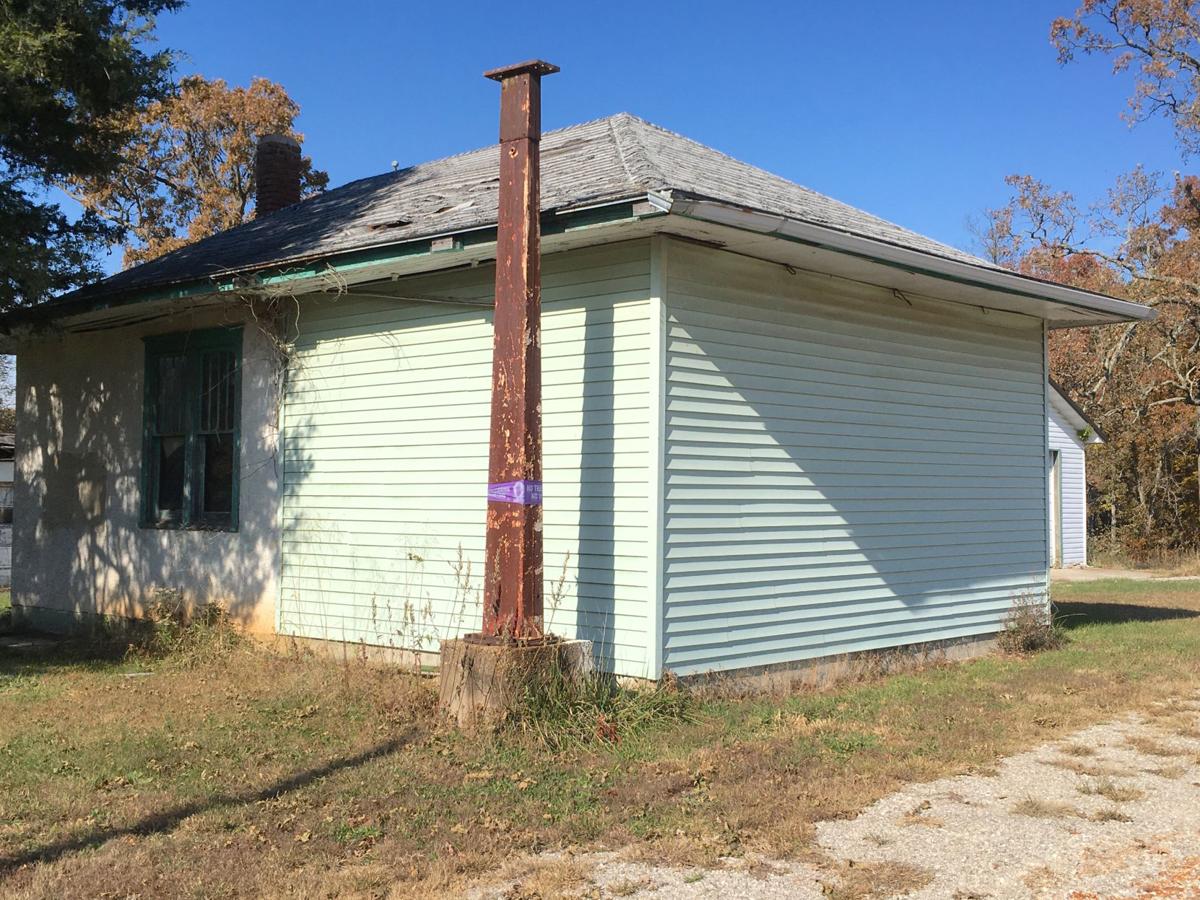 Enclosed front of the old Twin Oaks gas station on Route 66 at Phillipsburg. 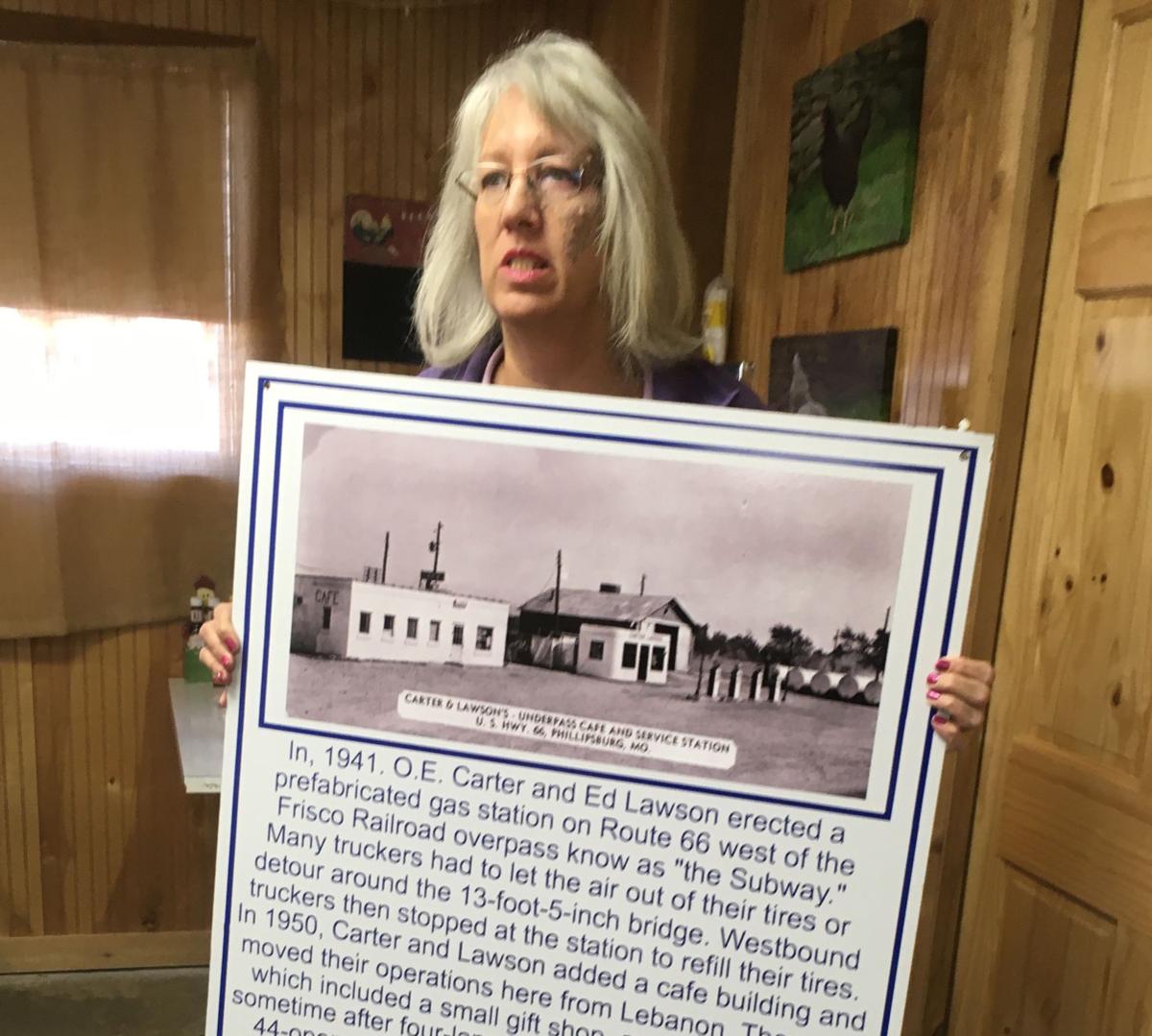 As the Lebanon-Laclede County Route 66 Society wraps up two restoration projects, its board began discussing a potential new one at Tuesday’s monthly meeting.

The board previewed signage for the Camp Joy cabin at Boswell Park and the Underpass Cafe at Phillipsburg. The Route 66 Society, with help from the city of Lebanon, restored the last remaining Camp Joy cabin earlier this year and moved it to the Route 66-themed park. And the group is almost finished restoring the facade of the Underpass Cafe building, which served meals to Route 66 travelers from 1950 to 1957.

Young Signs of Lebanon will install a sign on the north side of the Camp Joy cabin later this week replacing a temporary banner that has been in place since the dedication in June. The new sign will be visible to motorists on Route 66/Elm Street.

A folding sign that reads “BONNIE & CLYDE SLEPT HERE” will be placed on the bed inside the cabin. Notorious criminals Bonnie Parker and Clyde Barrow stayed at a Camp Joy cabin for two or three days in the early 1930s, their car hidden in the garage adjoining the cabin. It’s not known which cabin they slept in – the restored cabin didn’t have a garage – but they definitely were among Camp Joy’s best-known customers. The commemorative sign, also prepared by Young Signs, includes its own bullet holes.

The board also previewed an informational sign that will be erected at the Underpass Cafe. The board agreed to hold a sign-unveiling ceremony following the Route 66 Society’s annual membership meeting Jan. 25. The meeting will be held on a Saturday this time with the program starting at 10 a.m.

Finishing touches at the Underpass property will be the installation of non-operating neon tubing at the top of the cafe building and a sign on the Carter & Lawson Garage, which still stands. The Route 66 Society has searched unsuccessfully for an affordable prefabricated gas station that matches the one that originally stood at the location.

The Underpass Station and Cafe property is owned by Gary McMillian, who has been supportive of the project and has assisted financially.

The board Tuesday acknowledged the $500 preservation donation from the Route 66 Association of Missouri for the society’s work on the Camp Joy and Underpass Cafe projects.

Meanwhile, Route 66 Society President Bill Jones proposed that the group work with owner Kelly Hackler to replace the roof of the one-time Twin Oaks gas station on Route 66 west of Phillipsburg. The original front of the station has been preserved by an addition that extends to the old pump island, but the roof has considerable damage.

Jones has talked to Hackler and a roofer about the project. Discussions will continue. To learn more about Twin Oaks, go to http://www.lebanonroute66.com/yesterday_66/just-a-dream-right-now/article_38d92070-ce46-11e7-a846-ab6e9a6c86bc.html

Also Tuesday, board member Nicole McGinnis, who also is Lebanon’s tourism director, said she will talk to the city council next week about renewing the contract for two Interstate 44 billboards promoting Route 66 in Lebanon. She said the eastbound billboard at Phillipsburg, which is smaller, would have new artwork.

McGinnis said the city’s new Route 66 banners will go up on Route 66/Elm Street when the Christmas banners come down. She reported on the success of the Route 66 Passport program, which includes a stop at the Lebanon-Laclede County Library/Route 66 Museum, and proposed a Facebook page devoted to travelers using the passport.

And, as an indication of increased tourism in Lebanon, McGinnis reported that the city’s lodging tax generated 51-percent more revenue during the July 1-Sept. 30 period compared to the same months last year.

--The board agreed to notify the Missouri Department of Transportation that, if the Route 66 Gasconade River Bridge is demolished, the Route 66 Society would like pieces of the bridge for possible display in Boswell Park and at the museum. MoDOT notified those interested in the bridge last week that, because the agency is “unaware of any group actively pursuing taking over the bridge . . . MoDOT has scheduled the demolition for the April 17, 2020 letting.” Board member Gary Sosniecki said the Route 66 Society continues to support efforts of the Route 66 Gasconade River Bridge Guardians to save the bridge, but if those efforts fail, pieces of the bridge should be preserved locally.

--Loretta Young, who has chaired the Lebanon Route 66 Festival the past three years, informed the board that she is stepping down from that role. The board discussed the Route 66 Society working with possible partners so that the festival continues to grow.

--The Route 66 Society continues to look for a new president and vice president to succeed Bill Jones and Gary Sosniecki. Jones is stepping down as president when his term ends in January. Sosniecki resigned as vice president in June. Both continue on the board. The executive committee will search for nominees to be considered at the annual meeting. Jones praised the Route 66 Society’s accomplishments the past three years. “We’ve done great, guys,” he said. “I’m really proud of what we’ve done.”

--John Thomas, president of the New Ground Car Club, reported on its activities and charitable work, including its benefit car show for the family of 12-year-old Jailei Luke, killed Sept. 28 by a still-unknown hit-and-run driver.