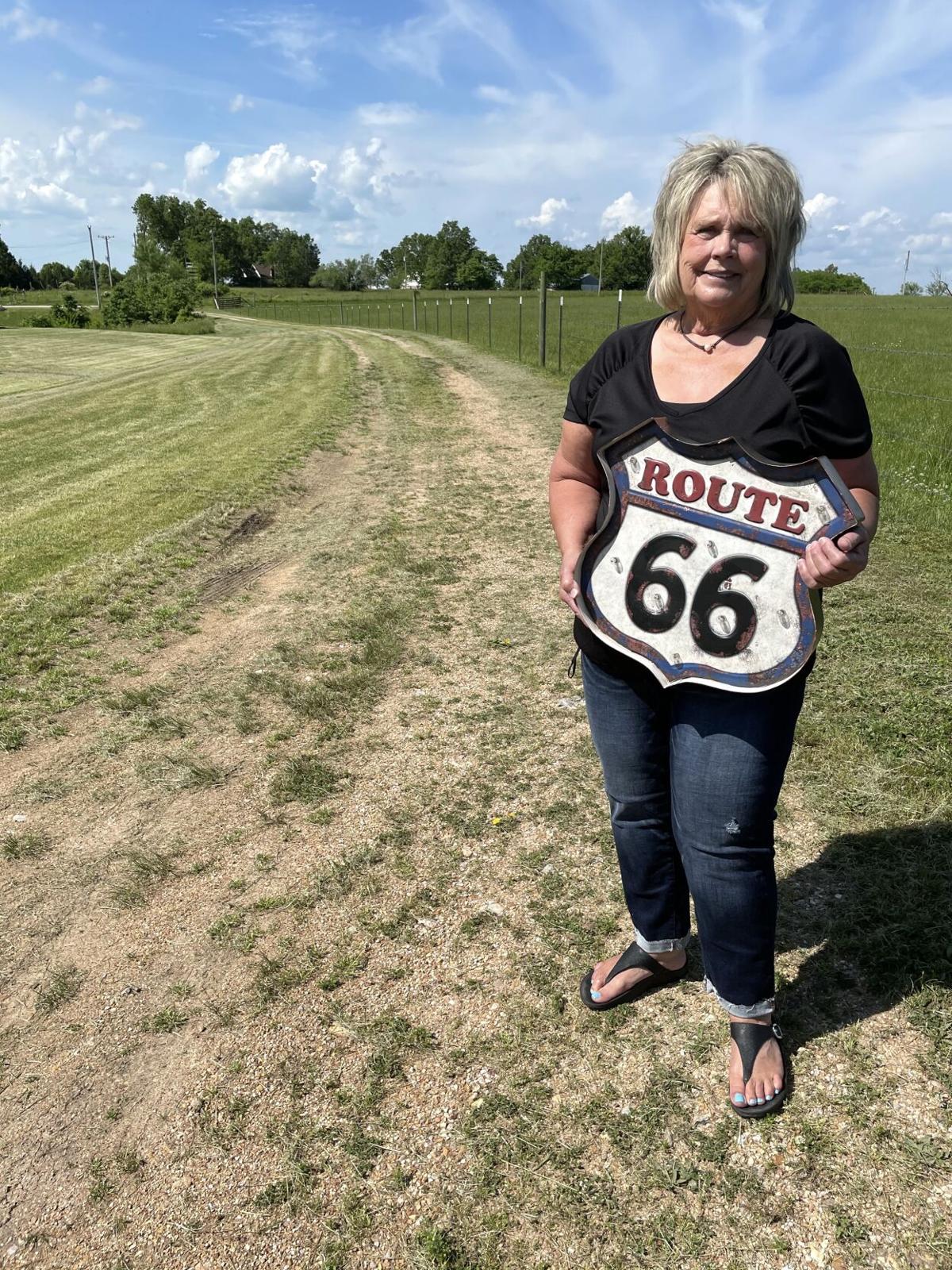 Norma Bledsoe stands along an early, unpaved alignment of Route 66 behind her house. 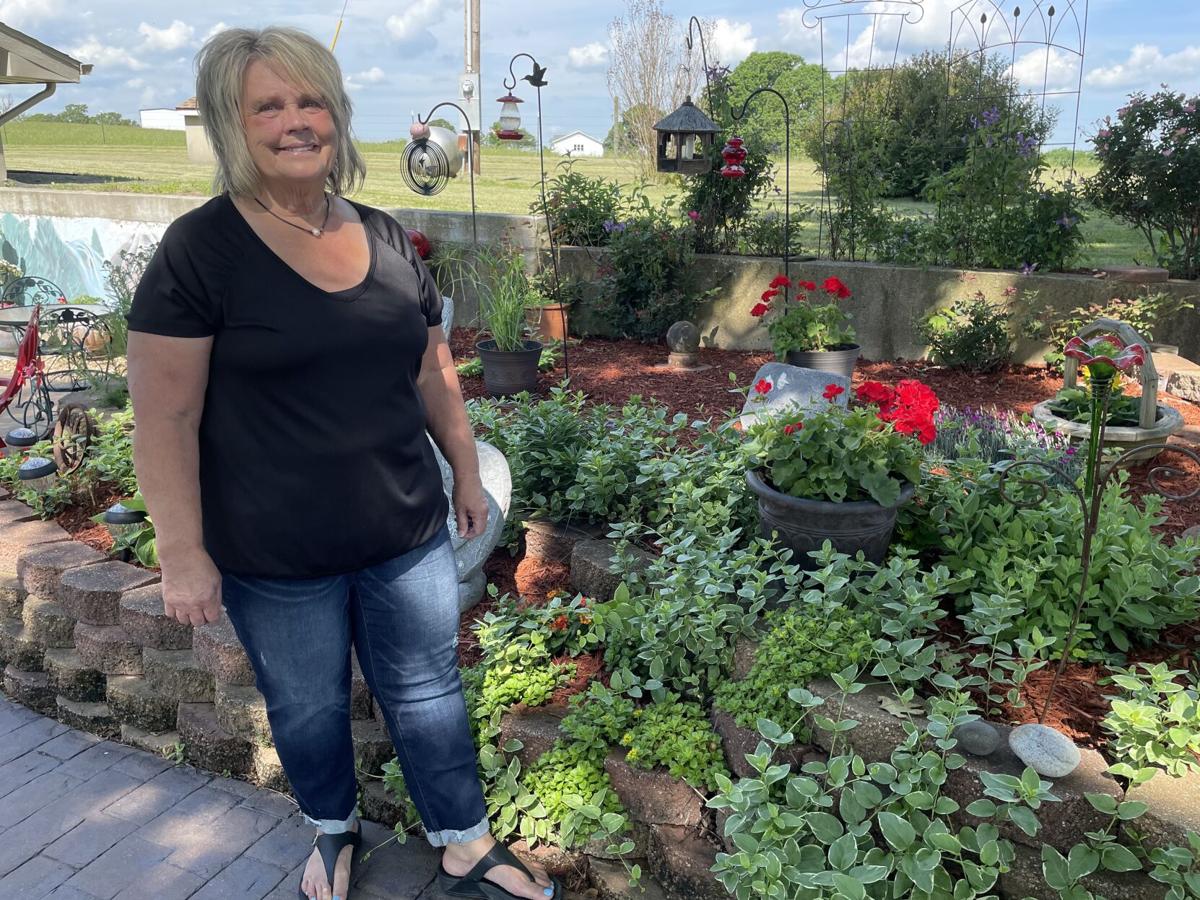 Norma Bledsoe and one of her flower gardens.

Not many can say that Route 66 runs in front of and behind their house.

Norma Bledsoe is one of the few.

That oddity alone would qualify her to be grand marshal of the 2021 Lebanon Route 66 Festival Parade.

But there is so much more to Norma’s story. For example, as a teen in 1961, she was the first carhop Bernie Bollig hired at Lebanon’s legendary Big Wig Drive-In on City Route 66.

She began a 39-year career as a machine operator for H.D. Lee in Lebanon at age 17, convincing boss Jim Prime that she could do the job.

Today, the widow and mother of three adult children is known for producing large quantities of baked goods — “I bake everything,” she says — often giving away as much as she sells.

Norma will lead the Route 66 Festival Parade in a 1965 Mustang convertible at 10 a.m. June 19 as classic vehicles roll west on Route 66 from the Lebanon Industrial Park to the festival grounds at Boswell Park. Lineup starts at 9 a.m.

Back to Norma’s unusual geographic connection to Route 66: Her home, about a mile east of Lebanon, fronts Route 66. But an early alignment of Route 66, probably dating back to when it was unpaved State Road No. 14, separates her back yard from Bledsoe family farmland.

The old, dirt highway is easily identifiable from the built-up roadbed and the ruts from the farm vehicles that still traverse it. Jimmy Bledsoe, Norma’s son, points to rocks at the end of a century-old culvert that still drains.

“I’m glad to say I live on Route 66,” she says with pride. Norma remembers the years after Route 66 was decommissioned when the segment in front of their house was renamed Pecos Drive. “I did not like that. If Haskel had been living, he would have thrown a fit about it.” She was pleased when the name reverted to Route 66.

Norma was one of 14 children — eight boys, six girls — born to Lowell and Velma Barker. “I helped Daddy with his sawmill,” she remembers. Lowell Barker also dealt with cars. “He did everything. The hardest worker.”

Husband Jerry died last year, nine days before what would have been their 56th anniversary. Suffering from dementia, he spent his last eight years in a nursing home. “It was horrible, a horrible thing,” Norma says of the disease. She recalls getting so attached to the elderly residents at the nursing home that she started baking for them.

Some days, Norma gets up at 4:30 a.m. to start baking. “I only made eight dozen (cookies) this morning,” she says with a laugh. These cookies were destined for graduation parties. She recently baked eight dozen hot rolls for a party. “The next big batch of cookies I’m making, they’re going to Kansas City.”

The baking keeps her busy. “A lot of times I’m not making money, but that doesn’t matter.”

Norma met Jerry while working at the Big Wig. “I’d seen him out there, but I didn’t know who he was. I wouldn’t pay any attention to him.” That changed — not in a good way — when Jerry and his friends let a raccoon out of their car at the drive-in. “I told Bernie, ‘I’m not going to wait on that car again.’ And I wound up marrying him!”

She adds: “I got into one of the best families I could have. They just treated me like a queen.”

Jerry was a car dealer. “He had some of the cleanest cars I’ve ever seen,” Norma says. The Bledsoes had three children: Jimmy, Janet King and Jennifer Hite. Norma takes pride in her six grandchildren. “They’re all very successful.”

She tells a story about the time Jerry was breaking in a pair of new boots, a gift, when he was approached by an older man coming off the highway. The man appeared destitute, and Jerry realized the man needed the boots more than he did.

“He gave him the new boots. That’s the kind of guy Jerry was.”

Norma loves her family, her neighbors — “they just feel like family” — and her church, Heritage Baptist, where she’s been a member for 50 years.

She points to a sign hanging on the wall of her sunroom.

It reads: “It’s a wonderful life.”