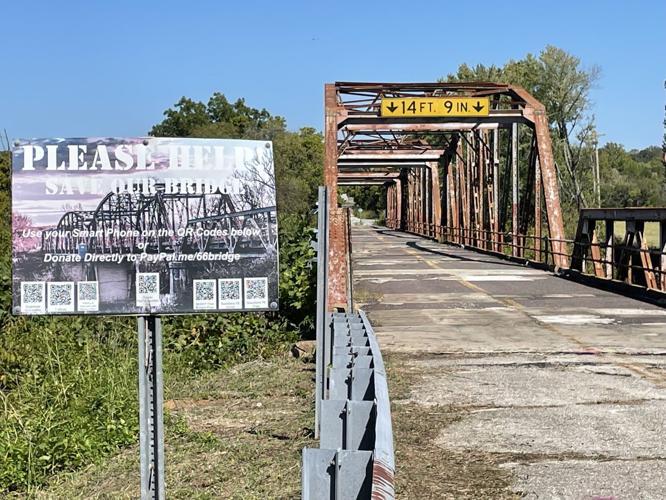 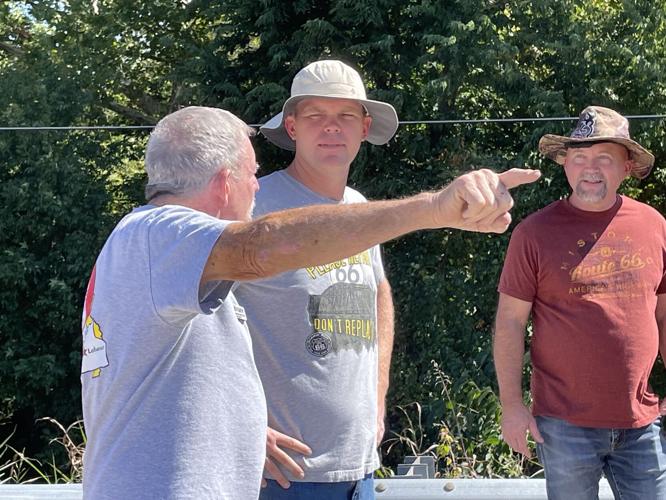 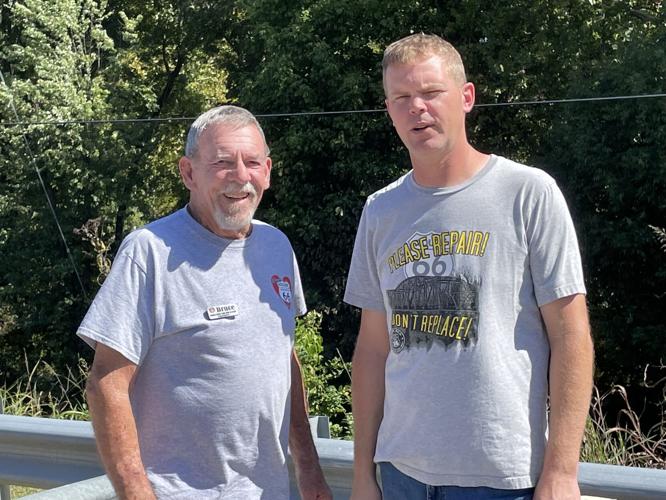 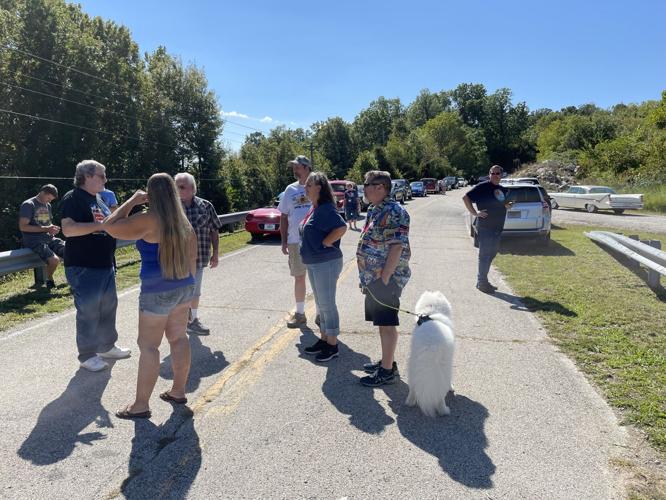 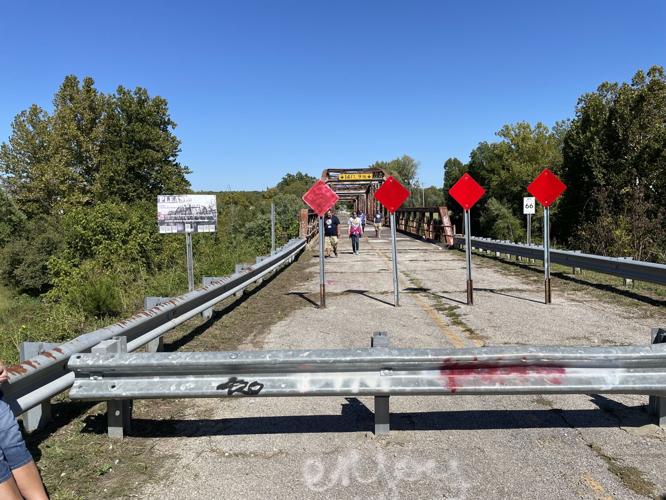 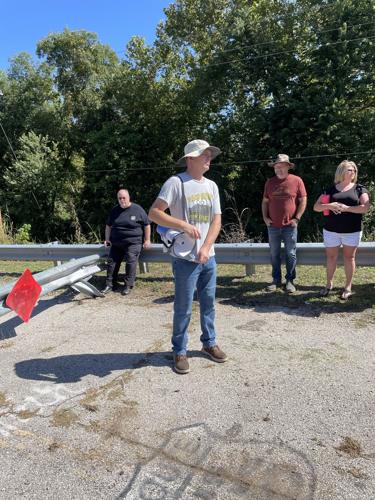 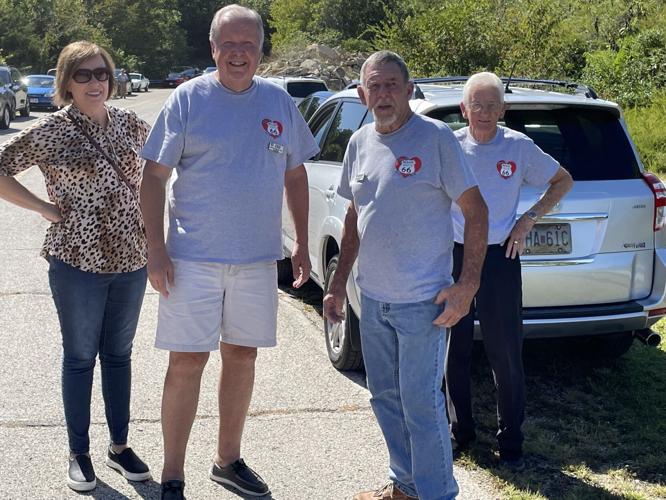 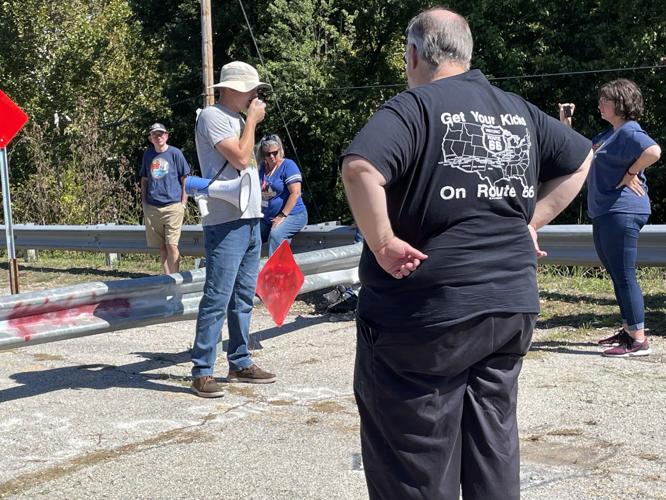 Rich Dinkela updates the Route 66 Association of Missouri Motor Tour on progress made in saving the Gasconade River Bridge. 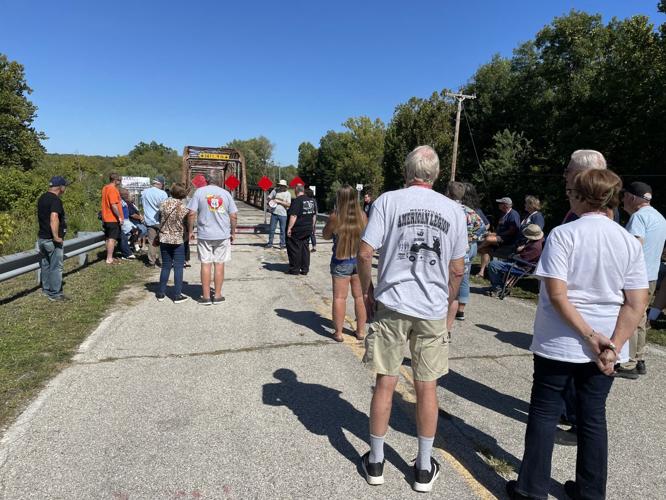 The endangered Route 66 Gasconade River Bridge in eastern Laclede County is on the verge of being saved after a nearly eight-year battle by preservationists.

'MoDOT has started its concession, basically, on tearing down the bridge.'

“Roamin Rich” Dinkela, president of the Route 66 Association of Missouri, estimated Saturday that chances of saving the landmark bridge have improved to 90 to 95 percent. Dinkela gave an update as the group’s annual motor tour stopped at the landmark bridge.

The Route 66 Association of Missouri and other groups, including the Route 66 Gasconade River Bridge Guardians, have fought to save the bridge since the Missouri Department of Transportation closed it for safety reasons Dec. 20, 2014, following a routine inspection.

The contract to build the four-span, steel-truss bridge was awarded 100 years ago this Dec. 9 — four years before Route 66 came into existence — on what then was called the St. Louis to Springfield primary road. By the time the bridge was completed in 1924, the gravel road was known as State Highway 14.

After several efforts to find a new owner for the bridge failed, MoDOT advertised for bids to demolish it.

Dinkela recalled Saturday that less than 48 hours before a bid was to be awarded, “the Federal Highway Administration stepped in and said, ‘No, you can’t do that; you’re not going to be able to tear that bridge down without further consideration.’”

The Route 66 Association of Missouri proposed in early 2020 that it assume ownership of the bridge with the goal of rehabilitating it for pedestrian and bicycle use. On Feb. 2, 2021, MoDOT rejected the association’s proposal, saying it failed “to adequately demonstrate a plan for the preservation and maintenance of the bridge or meet MoDOT’s requirements for assuming ownership and liability for the bridge.”

However, negotiations among various agencies continued, and on May 17 of this year, the Federal Highway Administration told MoDOT that the Route 66 Association’s plan was “generally acceptable, with some exceptions that need to be addressed.”

Dinkela said the first goal is stabilization of the old bridge to protect the new service-road bridge and the two I-44 bridges, which are downstream. The concrete deck will have to be removed, because decades of salt have absorbed into the concrete, causing damage to the steel superstructure. Lateral support will need to be added.

Prior to the breakthrough in negotiations, MoDOT planned to give the smallest section of the demolished bridge to Lebanon’s Route 66-themed Boswell Park for pedestrian use. However, the Lebanon-Laclede County Route 66 Society’s first choice always has been for the bridge to be saved in place.

For a history of the bridge campaign: http://www.lebanonroute66.com/bridge/