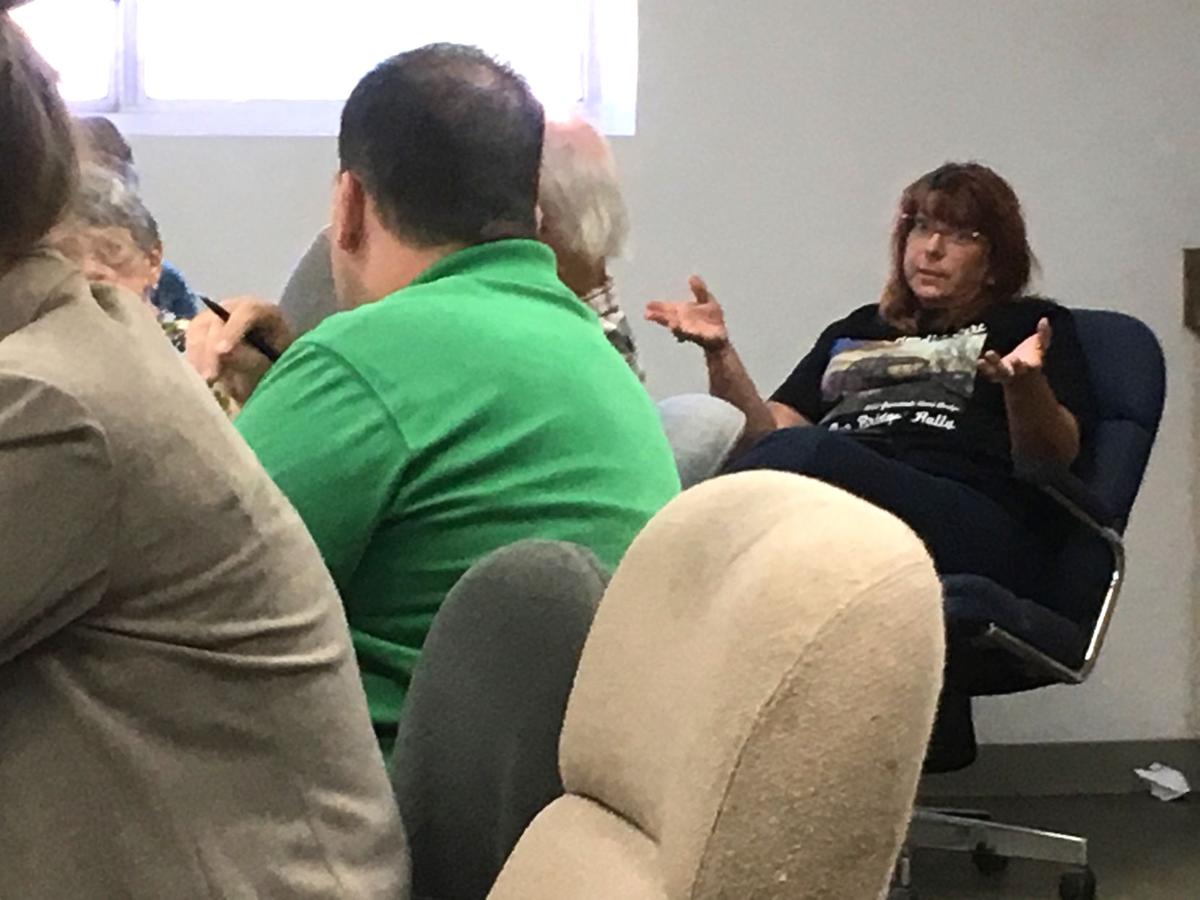 Jax Welborn, right, a board member of the Route 66 Gasconade River Bridge Guardians, discusses how a delay in transferring bridge ownership can impact fundraising. 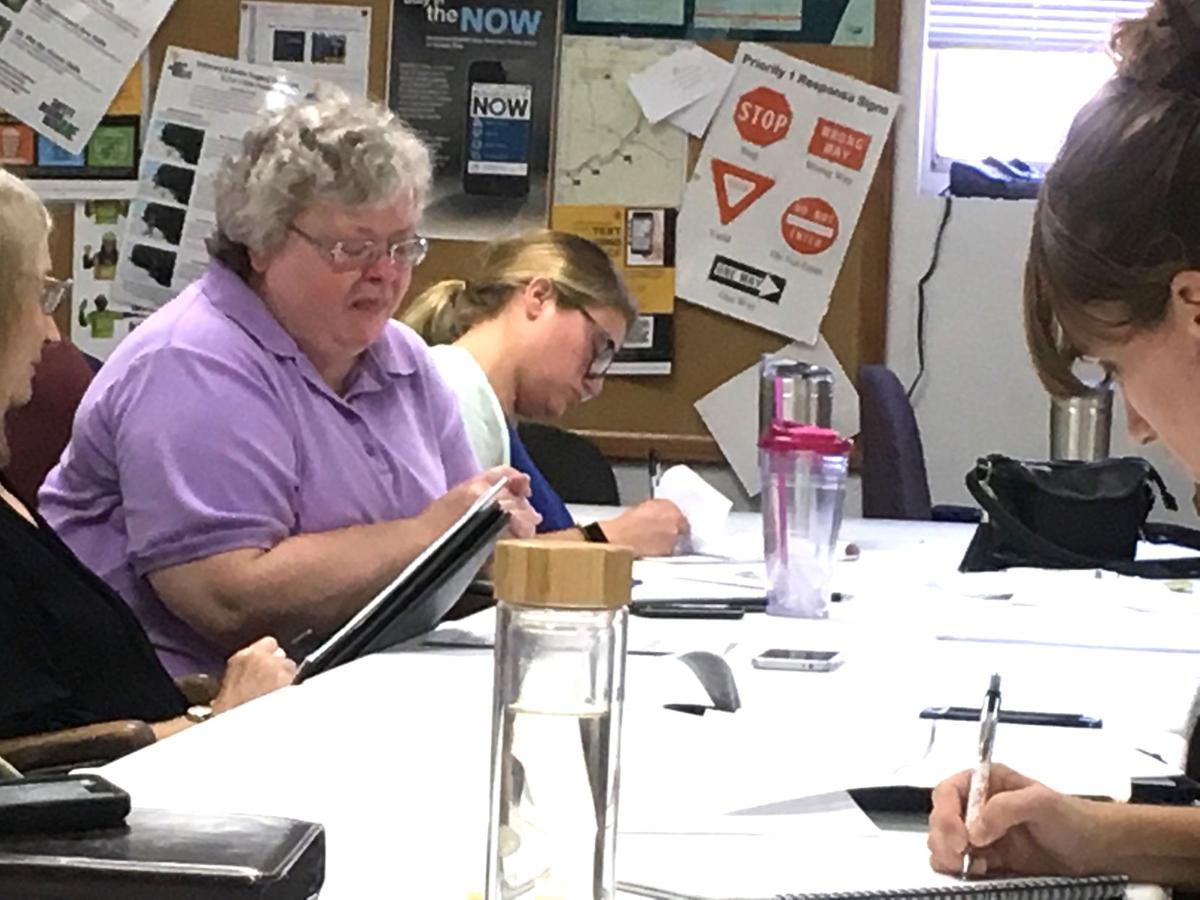 Jax Welborn, right, a board member of the Route 66 Gasconade River Bridge Guardians, discusses how a delay in transferring bridge ownership can impact fundraising.

An agreement for the Missouri Department of Transportation to turn over the Route 66 Gasconade River Bridge to an “interested party” for rehabilitation probably won’t be approved until early next year.

Supporters of saving the bridge were disappointed to learn the longer-than-expected timetable today (Aug. 23) at a “Section 106 Consultation Meeting” at MoDOT’s Lebanon Maintenance Facility.

“The interested party can’t begin fund-raising until they have possession of the bridge,” Judy Wallmark, secretary-treasurer of the Route 66 Gasconade River Bridge Guardians, told the group. Wallmark said supporters had expected the bridge to change hands in September.

Section 106 of the National Historic Preservation Act requires agencies that use federal funds, such as MoDOT, to consider the effects of their projects on historic properties. MoDOT plans to build a new outer-road bridge over the Gasconade River between and parallel to Interstate 44 and Route 66. Wednesday’s meeting enabled Karen Daniels, MoDOT’s senior historic preservation specialist, to put on the record that the project “will have no adverse effect on the Route 66 alignment and the Route 66 bridge.”

More than 20 persons participated in the 50-minute meeting – several by teleconference – including four board members of the Route 66 Gasconade River Bridge Guardians, which has been trying to save the historic steel-truss bridge since it was closed for safety reasons Dec. 18, 2014.

The meeting also included a variety of representatives from MoDOT, historic-bridge preservationists, other state and federal agencies, Tommy Pike, president of the Route 66 Association of Missouri, and three board members from the Lebanon-Laclede County Route 66 Society.

The Guardians have been working with an Iowa-based nonprofit, Workin’ Bridges, to assume ownership and rehabilitate the Route 66 bridge, although that organization was referred to only as the “interested party” throughout the meeting.

The name of the nonprofit “may be local knowledge, but we’re not going to let it out until the (Missouri Highways and Transportation) Commission does,” Daniels explained.

“Our commission has not signed off on it yet.”

MoDOT is 80 to 90 percent done writing a proposed legal agreement for the interested party to assume ownership of the bridge, project manager Troy Hughes said, adding that he hopes it will be done in the next month or two.

After MoDOT and Workin’ Bridges agree on the terms, it will be presented to the commission for approval. Although the commission meets monthly, it can take two or three months to get on its agenda, which means the bridge may not change hands until next year.

But MoDOT officials assured the Guardians that no harm will come to the old bridge even if construction starts on the new bridge before the deal is done.

“As long as we have an interested party or parties, we’re going to continue to negotiate,” Hughes said.

But if no deal for the old bridge exists by the time the new bridge opens in the summer of 2019, Hughes added, “at that point we’d have to make a decision.”

“I’d just like to see the process moving forward,” the Guardians’ Wallmark said.

“It is,” Hughes replied.

Jax Welborn, the Guardians’ liaison with Workin’ Bridges, stressed the need for an agreement so fund-raising can begin. She estimated that $2.5 million to $3 million will be needed for the bridge to be restored for pedestrian and bicycle traffic and events such as car shows.

“We’ll need all of your help,” she said.

Nathan Holth, webmaster of HistoricBridges.org, pointed out that “this is a very large project for any nonprofit to take on.” He voiced concern about supporters not getting enough donations and MoDOT then tearing down the bridge.

But Hughes said, “once we transfer this bridge to a private entity, MoDOT has no control over the structure. With it being a private bridge, we’re out of the picture.”

Meanwhile, MoDOT expects to let bids in April for the new outer-road bridge, which will be parallel and the same height as I-44.